Indigenous resistance: Chirley Pankará launches candidacy in the land of the bandeirantes

Daughter of the Pankará people seeks spot in state assembly, which has long history of marginalizing her people

On a chilly Thursday evening this September, seated on the steps outside PUC, a large Catholic university in São Paulo, Chirley asks for her pipe so she can have a smoke after participating in a talk to students. She feels comfortable at this school where she did her master’s in education, before going on to pursue her doctorate in anthropology at the University of São Paulo. With these diplomas on her résumé, Chirley—born Chirley Maria de Souza Almeida Santos—is one of the thousands of Northeasterners who migrated to the state of São Paulo in search of a better life in the 1990.

Chirley’s birth certificate, issued in a village in the municipality of Floresta, Pernambuco State, bears the same surnames as millions of other Brazilians who live at the base of the social and economic pyramid. But this October 2, Chirley will be listed on the state ballot under a more powerful family name: Pankará, the name of her people. She is one of thirty Indigenous candidates across the country who want to move to the front lines of Brazilian politics in 2022, carrying with them their peoples’ names.

As a candidate on the PSOL ticket—Socialism and Liberty Party—Chirley is vying for a seat in the Legislative Assembly of the very state that may have decimated more of her ancestors than any other in the history of Brazil. In the sixteenth century, white men who couldn’t afford to buy enslaved Africans began kidnapping Indigenous people in São Paulo, then Piratininga. These men hired bands of adventurers and fortune seekers known as bandeirantes to capture Indigenous peoples to serve as slave laborers in exploring for ore. On top of this violence, they stole their land. The rest of the story is well known in Brazil: recast as heroes, these bandeirantes have been memorialized with statues, museums, and highway designations in tribute to their “bravery.” Even the governor’s mansion is called the Palácio dos Bandeirantes. But São Paulo cannot erase its indigenous roots. Today there are thousands of them living in the state. 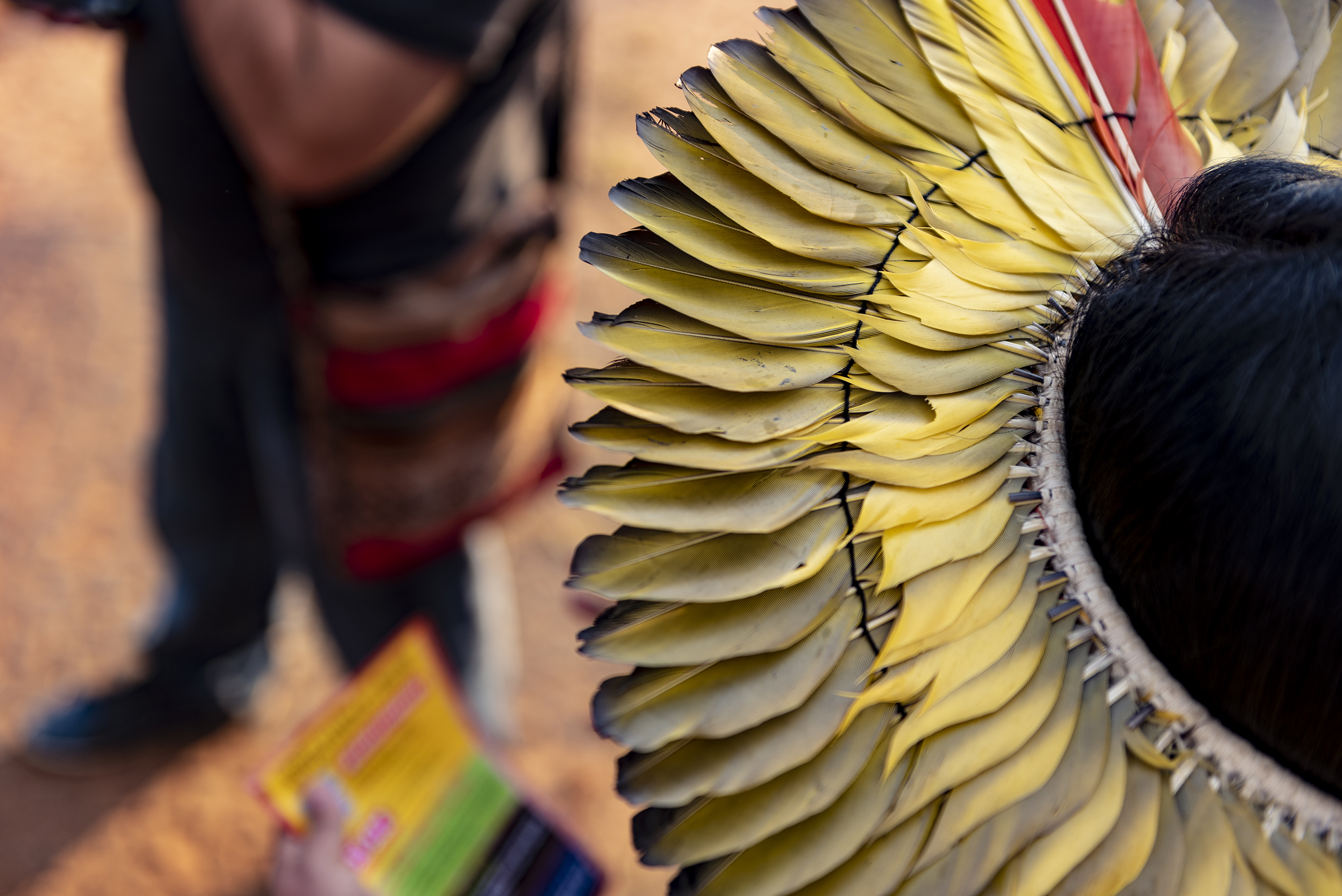 Chirley, along with other Indigenous candidates running in the São Paulo State elections, has decided to turn history around to recoup a piece of her people’s soul, now erased in Brazil. The best way to do this is by competing for a space of power in this year’s elections, making it possible to influence public policies that affect a population largely ignored by most state residents. “We’re going to decolonize São Paulo,” the candidate said during a meeting with intellectuals, held at a theater in downtown São Paulo just days after her candidacy became official in mid-August.

Standing with her is Sonia Guajajara, an Indigenous leader running for federal deputy for the state of São Paulo and someone who has helped publicize her Pankará sister’s campaign. “We unite and gather to empower Indigenous peoples and guarantee our rights,” says Chirley, who came to São Paulo in 1998 looking for new opportunities to help her Indigenous family back home in Floresta, where drought, economic crisis, and the non-recognition of Indigenous land presented hardships that Chirley, the oldest of ten, felt compelled to overcome. She moved in with some relatives in Mauá, Greater São Paulo.

Chirley’s first job was as a housemaid, although she had earned a teaching certificate in her hometown. For her, it was the beginning of a long apprenticeship in a land where other Indigenous people were also migrating from the Northeast. “I felt the weight of invisibility because I was a Northeasterner,” she recalls. Being Indigenous doubled this weight. Yet her restless spirit and open mind helped her envision new possibilities.

Right from her first job, she embraced every opportunity that came her way, including a scholarship to study at an educational college in Mauá. For eight years, she directed the Guarani people’s school of childhood education in the village of Jaraguá, where she could be close to her culture. There, she witnessed up close the harsh reality suffered by Indigenous people who want to study their own language and employ their own educational approaches. She also sensed how Brazil’s wealthiest state has managed to push aside native peoples, who live under the constant threat of losing their territory.

The latest data from the Brazilian Institute of Geography and Statistics (IBGE) shows a population of 40,000 Indigenous people in the state of São Paulo in 2010, three thousand living in villages in outer areas. These figures are quite out of date, according to the anthropologist Emerson Guarani, who suggests the number is now higher, not only because of the growth recorded in the last decade but also because many Indigenous people are cut off from services like the census. “An exodus from Indigenous territories and the very way the State views us has effectively created islands,” the professor says, going on to explain that it has always been the government’s goal to integrate Indigenous people into the urban context.

This is the reality that the 48-year-old candidate hopes to change, if elected. Chirley traveled a stretch of this political road earlier, in 2018, when she and eight others were elected to serve a collective term of office in the São Paulo Legislative Assembly. Among those serving with her were Erika Hilton, now trying for a seat as federal deputy, and the Black journalist Monica Seixas, who leads the Activist Caucus. 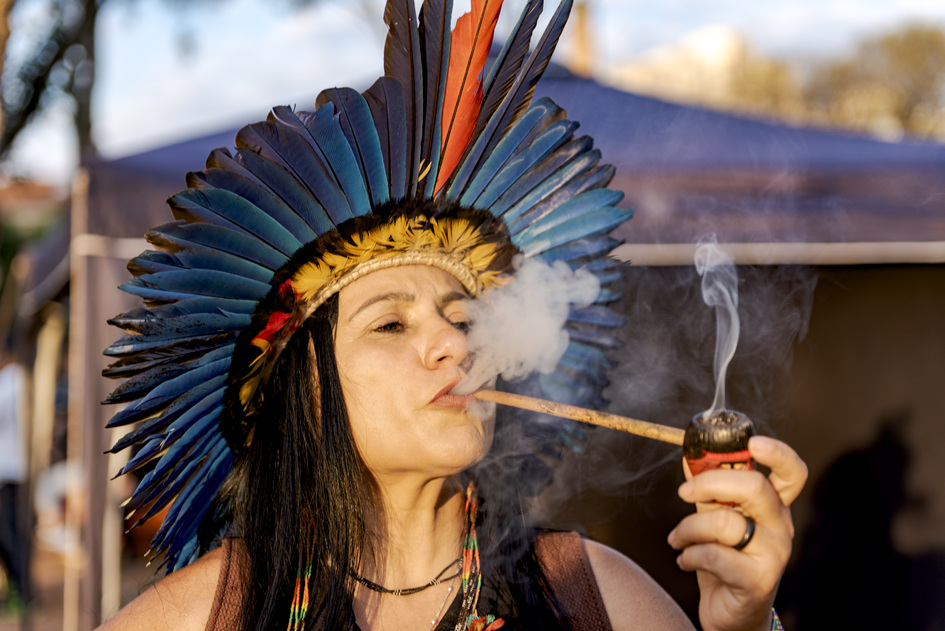 The group garnered 149,844 votes in the last elections, ranking tenth among São Paulo state deputies. “I was a co-deputy, but I didn’t work on the floor; I was involved in drafting bills,” say Chirley, as she campaigns on a viaduct on the west side of São Paulo, a traditional feather headdress, or cocar, in her hair. While working behind the scenes at the Legislative Assembly, she had a hand in seven amendments involving Indigenous communities. She also played a role in pushing through the bill that placed Indigenous August on the state’s official calendar, dedicating an entire month to activities centered on native peoples—an apparently modest initiative but one that draws attention to this population’s invisibility.

Chirley aspires to put Indigenous peoples on the state’s agenda in all possible areas, ranging from calls for Indigenous schools that respect and teach native languages to improved healthcare services and educational and employment quotas. After the lands of her Floresta village were demarcated in 2003, the government opened a local health post and a school, heating up the local economy by generating jobs and income for the Indigenous. This is the kind of integration Chirley would like São Paulo’s native peoples to enjoy.

But her work is not limited to indigenous peoples. The cause of the underprivileged who live on the periphery, and of women – this is what motivates her journey. “All those who suffer from inequality”, she says. And could a woman speak on behalf of men? “Men have already spent centuries making us laws, now we can make laws that consider them”, she said to PUC students in a conference in which she spoke beside federal deputy Samia Bonfim, who is standing for reelection.

Going it alone as a candidate isn’t easy. To begin with, Chirley’s campaign is entitled to funding of only $2,880 from government coffers under Brazil’s campaign finance laws. “After you’ve paid for an attorney and bought campaign materials, it’s all gone,” she says. With no resources of her own to invest, she has relied on another powerful form of capital, one that has been flourishing during this period: the empathy of other women in the race who are contenders for federal deputy. Among them are Sonia Guajajara, Sâmia Bonfim, and Erika Hilton, who offered to share space on their own campaign materials, where they have added Chirley Pankará’s name. They have also invited their colleague to participate in an array of events, where she can introduce herself to her voters. With more funds available to them, these fellow candidates are broadening Chirley’s exposure. 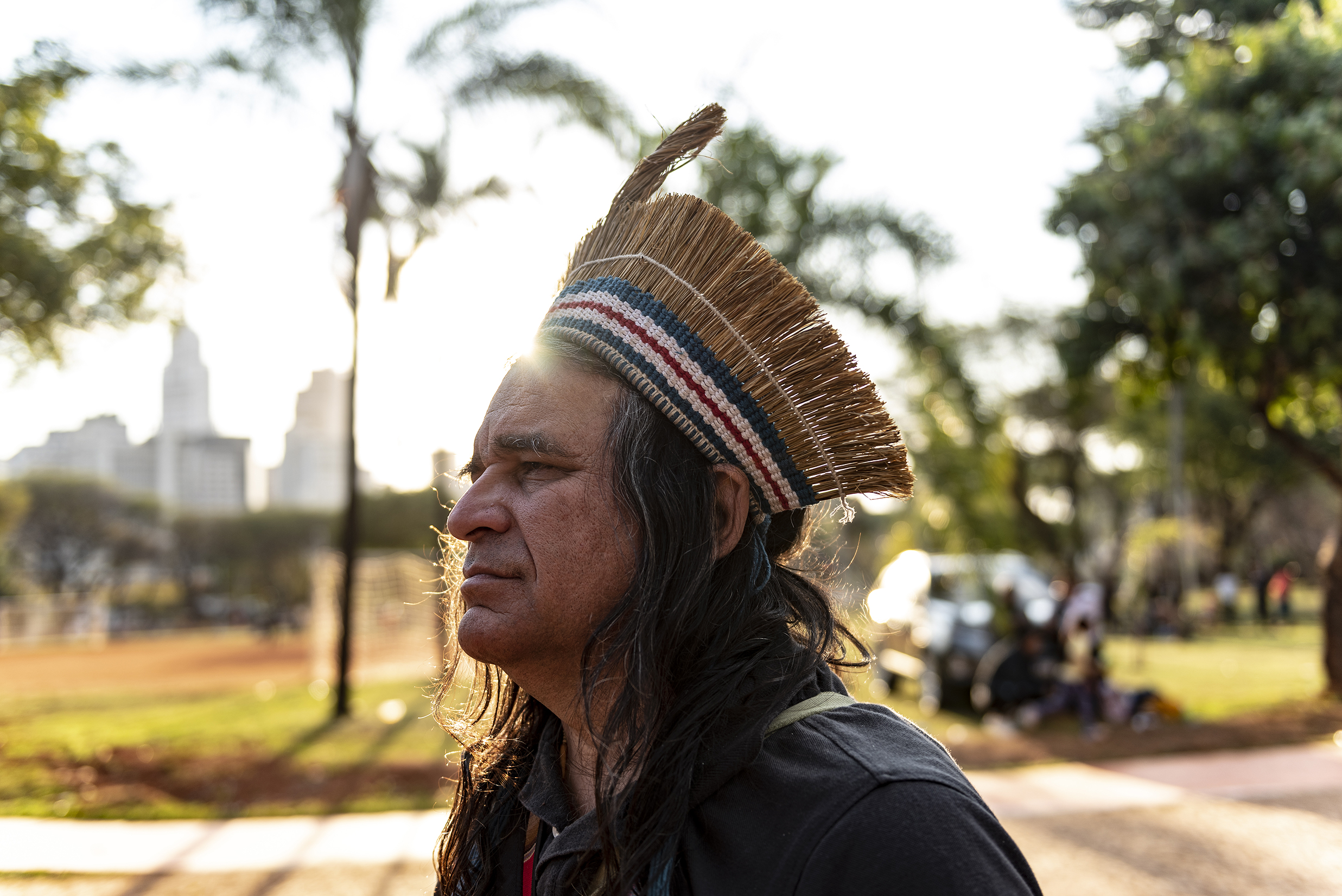 Other volunteers have embraced the campaign, like Makko, member of the Karao Jaguaribara people, and Isabela Kariri, both of whom traveled from Rio de Janeiro to back Chirley. It doesn’t matter that they come from different Indigenous families—empowering a sister means empowering the entire community, especially those in the Amazon, the most vulnerable region today.

Of all her credentials for the job, candidate Pankará particularly likes to cite the fact that she is the granddaughter of Maria Divina, known as Mãe Bó (Mother Bó), a midwife, rezadeira [healer], and artisan of the Pankará Indigenous people in Floresta. Mãe Bó served as her own midwife when Chirley’s mother was born and later assisted with the deliveries of her daughter’s ten children. “When I think about her, I remember how resilient she was, how loving to everyone, warm and welcoming, always ready to help people,” Chirley recalls. Mãe Bó, who passed away in 2020 at the age of eighty-nine, influenced Chirley’s steps and choices as part of her life’s mission. “Her pure heart was always ready to receive people. Many people who got sick went to stay at her home. She cared for everyone in my community; she was always ready to welcome them in. Maybe that’s why I’ve followed this political path, thinking about others, about the collective,” says Chirley. She believes it was her vocation that drew her to Indigenous rights and nature conservation movements, as well as to social projects concerned with the most vulnerable. “I know what food insecurity is because I’ve experienced it,” she says. “Now I want to help others, so they don’t go through the same thing.”

The candidate wants to support the journey of Indigenous women, which began with Joenia Kapichana and Sonia Guajajara; the former was elected federal deputy in 2018 on the Sustainability Network (Rede Sustentabilidade) ticket, while the latter was vice-presidential running mate of PSOL candidate Guilherme Boulous that same year. Sonia and Boulous earned a little over 600,000 votes, less than one percent of the total, but they won space and projection. Now they want to get to Brasília as members of Congress. That’s where Guajajara wants to be, alongside Joenia, so they can take on the ruralist bloc, joining as well with deputies from the Black, feminist, and landless movements. For her part, Chirley has her eye on the São Paulo State Assembly, where she can work to dismantle bandeirante racism. 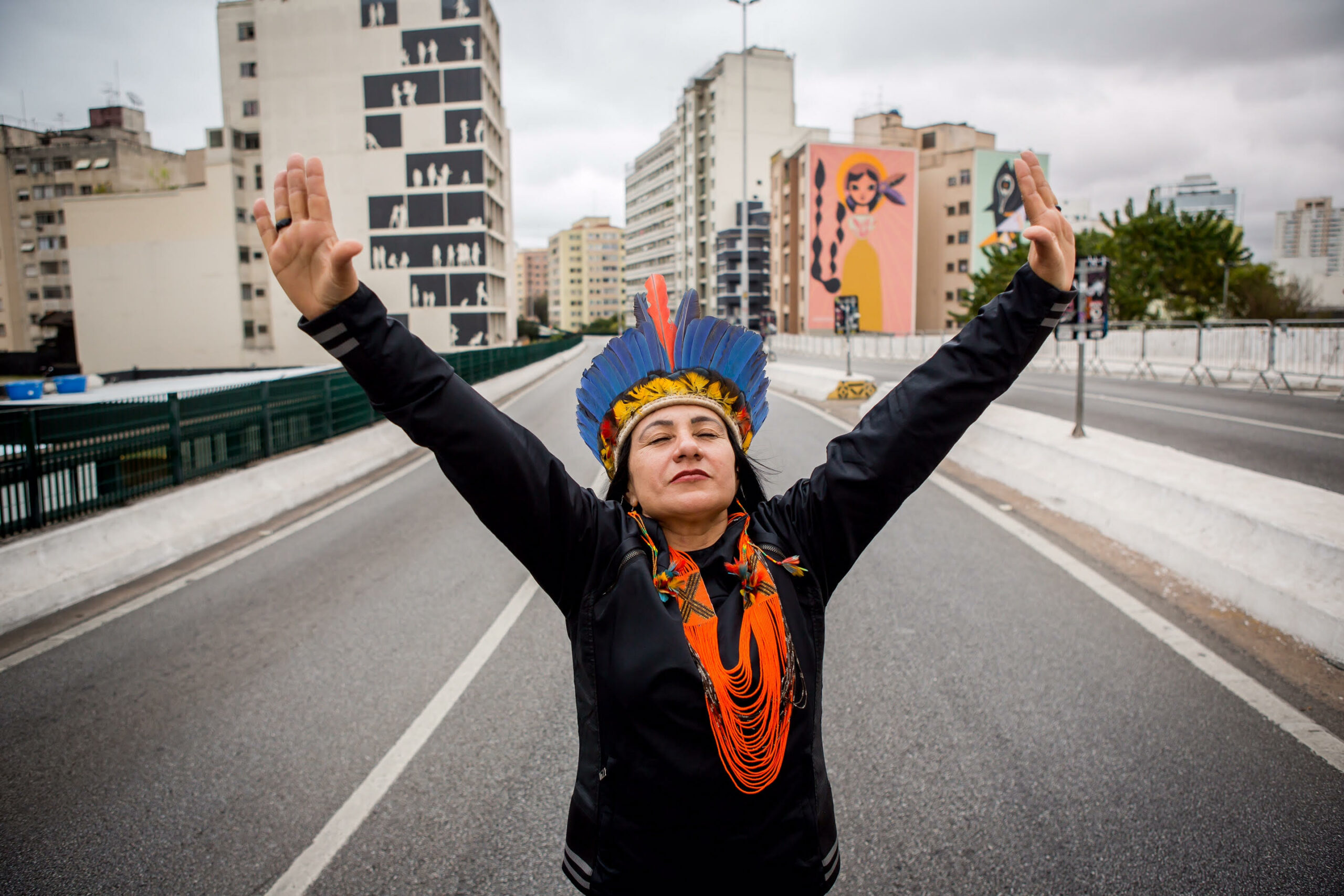 Why SUMAÚMA is voting Lula